Ben Rundle Shares one of his Favourite Stocks, Armidale Investment Corp in a Short Interview with Alan Kohler

Alan Kohler: Armidale Investment Corporation is a company that I had never heard of before this and there seems to be a pretty weird little business really, they seem to be changing quite quickly too.

Ben Rundle: Yeah, not a very easy business to understand, particularly with what has been going on in terms of the accounting side of things. Last time we spoke they were a listed investment company reporting a monthly MTA. Since then they have announced that they have changed to an operating entity, rather than an LIC, so they released in February, the first time that they have released their financials as an operating business, and as you can imagine moving strategies is quite complicated and quite convoluted. At the time that those results were released, I think the company failed to put out a presentation at the time which kind of gave investors a better view of how things look and how things will play out going forward. It was really just a very complicated set of accounts that to be honest not a lot of people understood. The stock has sold off a little bit since then. Fundamentally, we don’t think that anything has really changed with the business. You are kind of pulling together a lot of businesses together; it is always going to be a difficult process. I think that probably the other issue that we underestimated. I think the company had communicated to investors that it was going to move to an operating business, and I think that that was baked in to the share price.

AK: Why did they do that?

BR: Initially the business was mainly an investment in 2 companies. The main one being a loan book, an equipment financing loan book. The business  though, to grow, they decided that a better strategy for them, was to actually go and consolidate some of the equipment financing brokers, which would not only give them an earning stream from the brokers, but also give them a better avenue or a better lead path to be able to fund new equipment leases as well. So they weren’t able to do that under a listed investment company structure, so it is more of an operating business is definitely the right way to do it, but the process is obviously quite complicated.

AK: But the brokers they have been investing in, they are only buying 60% or 70% of. Is that because the minority shareholdings are held by the principals in those firms?

BR: That’s right, yeah. So the way that they have done it is kind of aligning themselves with those guys and saying OK, we don’t need 100% of the business if we are happy with what the business is doing. So in a lot of cases they have only got 50% of the business that they own. Platform Finance Leasing Group, for instance, they own 60%, Consolidated Finance they’ve got 80%, Queensland Pacific Finance they have got 50% and Links finance they have got 50% as well. So if they are happy with the way that those businesses are being run, then they are happy to not have a full ownership position. Now, that could change in the future and there are some put and call options in place to potentially change that down the track. But for now I think they are happy with the current ownership levels

AK: And how big a network of equipment leasing brokers do you think they will end up with?

BR: Good question, well the network at the moment writes about $3 billion in equipment leases so AIK really only has a book of about $100 million at the moment. So there is obviously a decent, and I am not suggesting that they will get all of that three billion or anything, but I do think that they will be able to grow and certainly take a part of that.

AK: Well the brokers customers won’t like it if they only end up as marketers for AIK’s own book, then they aren’t actually brokers any more.

BR: Correct, that is exactly right, so it is more of an option an extra option for the brokers to be providing AIK’s services, but their certainly will be other offerings as well. They can’t just stuff AIK’s proposition down their customers throats, because they won’t have a lasting business if they do that.

AK: So what sort of growth you think you can project from this, what are you projecting in your modelling?

BR: With all of the businesses coming together, I think they have about $17 million in EBITDA at the moment. That is on an annualised rate. What they will have now is more scale, so they will be able to grow a little bit faster than they have in the past. So our numbers assume that in FY 18 they can do around $22 million in EBITDA and they will have new lease origination of around $55 million. So that will give them net profit after tax of around $13.8 million and we value that at about 16 times, which gives us a 21c valuation.

AK: Right. And what is the share price at the moment?

BR: Share price is 14.5c, so it has come off a bit since we spoke. So it represents probably more value since we spoke last time. 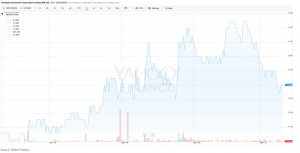 Articles of Interest NAOS Insights NAOS in the News