What is the stock?

Enero Group Limited (ASX:EGG) is a group of marketing and communications companies with operations in Australia, USA, UK and Europe.

How long have you held the stock?

It has been a long term holding for us.

Enero is the old Photon Group, a marketing and communications group which came unstuck spectacularly approximately six to seven years ago. Photon, as it was known back then, grew too fast, too quickly, and eventually ended up in receivership.

Throughout this process, numerous divisions were sold off and new management was brought in to essentially rebuild (under the new name Enero).

Over the past five years, Enero has successfully navigated the first two steps, by steadying the ship, returning the company to profitability, removing the remaining legacy restrictions, rightsizing the cost base and rightsizing the number of businesses within the parent group. It has been anything but smooth sailing, with at times an unfavourable market backdrop and turnarounds taking longer than initially expected.

Enero has now reached the ‘reimagined’ phase of the aforementioned strategy. The company has recently undertaken its first successful acquisition in many years, has a strong cash balance, has recommenced paying dividends, and is firmly focused on strong revenue growth.

How is it better than its competitors?

To the critics, Enero Group is simply a small version of a large marketing conglomerate such as WPP or Publicis, however, we believe their relative size has great advantages. Enero is a company which operates with a ‘one company balance sheet’ mantra. Their respective divisions are all working to a common goal, with work flowing across different geographies for multinational clients, in contrast to its major competitors which often have silo-ed businesses and hence potentially duplicated costs.

Clients are shifting towards wanting a job done by the right group for that job, rather than having large holding companies provide retainer work across multiple areas with less effect. This ‘fit for purpose’ ideology suits a company like Enero which is nimble and aligned.

The managing director is a highly respected industry figure. He was the founder of one of the companies within the Enero Group (BMF). Furthermore, the board is headed by a chair who possesses global CEO experience with a major US media conglomerate. The management team have been responsibly delivering on the ‘remedial’ and ‘reliable’ steps of the turnaround and are now hungry to grow the business with ‘all the shackles’ removed.

What is your target price?

Target price of $2.00. Furthermore, the company has recently announced the commencement of fully franked dividends.

At what point would you sell it?

How much has it added to your overall portfolio over the last 12 months?

It has had a minimal contribution to overall portfolio performance over the past 12 months.

Where do you see value?

In an industry where reputation is everything, the Enero group contains three very good businesses: Hotwire PR – voted best Tech PR firm in the world; BMF – was the creative agency of the 2000s and recently won the award for most effective Australian ad agency, and; The Leading Edge – a market research firm which has clients in over 30 countries.

We feel that based on the quality of these three businesses, the sum of the parts valuation is significantly more than the enterprise value of the Enero Group.

Our valuation thesis is supported by referencing the earnings multiples which some of the big four accounting firms and large consulting groups have recently paid when making acquisitions to enter this space. Firms such as Deloitte and Accenture are seeing the need to offer holistic services to their clients, which include marketing and communication services, for which they traditionally haven’t had the internal expertise, and are thus driving acquisitions in the sector – and we expect this trend to continue over time. 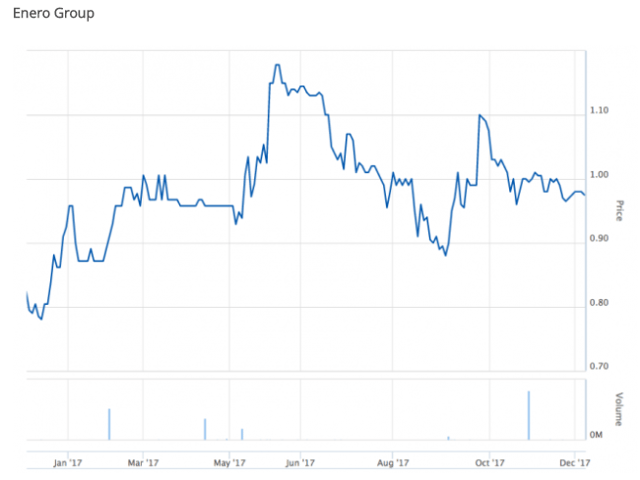 Important: This content has been prepared without taking account of the objectives, financial situation or needs of any particular individual. It does not constitute formal advice. Consider the appropriateness of the information in regards to your circumstances.